Seven ships lie anchored in the Bay of Fundy, off the mouth of the Saint John River. The passengers  board are a curious collection of refugees – they are farmers and doctors, carpenters and lawyers, craftsmen and soldiers – people of every age, from all walks of life. As they gaze grimly upon the rocky peninsula and the Fundy mud flats sprawling before them, they share a common longing for the homes they left behind.

From the beginnings of the American Revolution in 1774, to shortly after its conclusion in 1783, some 40,000 British subjects fled north to escape persecution. The 3,000 “Loyalists” – as they were called – who arrived in Saint John that May were followed by 11,000 more before the year ended.

The Loyalists established two settlements at the mouth of the Saint John River – Parr Town, named after the Governor of Nova Scotia; and Carleton, after their Commander-in-Chief in New York. Many moved and settled upriver. In 1785, the two settlements were incorporated by Charter into the City of Saint John. In time, the Loyalists would come to regard their infant city with an affection similar to that which they had felt for their American homes. This deep sentiment, combined with patience, toil and a strong will to survive, enabled them to build a brand new life upon this once seemingly inhospitable shore.

The LOYALIST TRAIL walking tour retraces the footsteps of our founders – exploring the spots where they landed on May 18, 1783. You’ll visit the Old Burial Ground; the County Court; Loyalist House – now a museum of period furnishings; historic Trinity Church; Saint John’s delightful City Market; and so much more.

Explore the very heart of old Saint John and step back through two fascinating centuries of our city’s history.

The courthouse was built in 1825 to plans by Saint John architect John Cunningham, who designed many prominent Saint John buildings of the period. Fluted pilasters and a pediment on the upper floors evoke imagery of a Greek Temple, considered an appropriate characteristic for public buildings of the time. Of special interest is the stone staircase, which spirals up three storeys without a central support. The Court was still in use until late 2012. The Saint John Law Courts opened in early 2013, located at Peel Plaza. 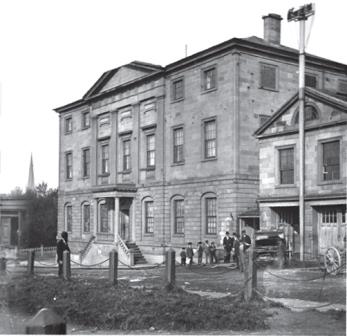 Known originally as “Great Georges Street” after King George III, King Street East was considered a suburb until the early 1800s. The Great Fire of 1877 destroyed all the buildings on the south side of King Street East, except for the Court complex.

This area was set aside as a public ground in the original Town plan drawn up by Paul Bedell in 1783. The oldest surviving stone dates to 1784 (Conradt Hendricks) and is located on the southern side of the graveyard near the southwest corner. In April 1848, the graveyard was closed to further burials by an Act of the Provincial Legislature.

This is one of four squares included in the original town plan. The site was cleared in 1844 and laid in an ‘X’ pattern. The unique two-storey bandstand was donated by the City Cornet Band as a “Memorial to Edward VII, King Emperor 1901-1910.” Of particular interest is the Young monument, erected by public subscription to commemorate the valiant efforts of Frederick Young to save a drowning boy.

The City Market has been in continuous use since 1876 and is believed to be the oldest common-law market in Canada. Designed by local architects, McKean & Fairweather, the interior roof supports are suggestive of a ship’s hull. The Market is open six days a week, year-round. 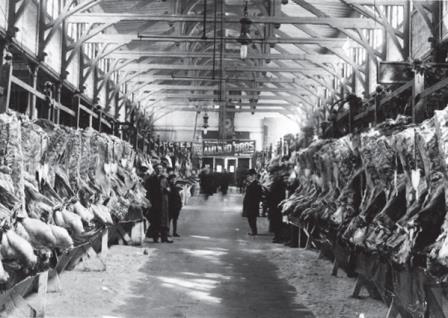 On the outside wall of the City Market is a sculpture work entitled “Figurehead.” Commissioned by Uptown Saint John Inc., this piece was installed in July 1995. Local artist Carol Taylor had taken her cues from the interior roof supports. The figurehead is a stylized interpretation of those which guided wooden sailing ships. It is comprised of individually sculptured clay tiles affixed to a fibreglass background. Each tile has been fired and glazed to form the whole figure and withstand the test of time.

This Georgian style structure, three storeys high, is the oldest surviving brick building in Saint John. It was built in 1819 for Joseph Nutting, Collector of Customs.

The house was built in the Georgian style by Loyalist David Merritt between 1810 and 1817. It was acquired by the New Brunswick Historical Society in 1959 and restored as a museum with period furnishings. It has been recognized by the American Association for State and Local History for excellence in restoration. Loyalist House is open daily in the summer. Admission charged. 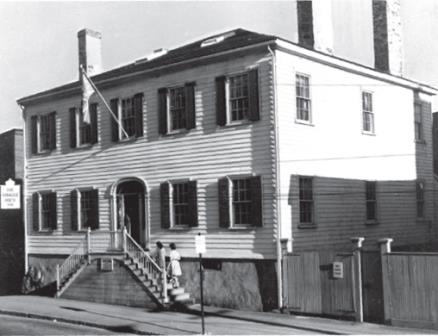 This is the dividing line between regularly and irregularly laid-out streets. Note the change of street names north of Union Street.

This church, completed in 1825, was the first stone church built in the city. Although named St. John’s Church, a national historic site (1987), its contrast to the many frame churches of the day resulted in its being dubbed Stone Church. Stone Church welcomes visitors during the week. An informative pamphlet is available in the church. During the summer months, guided tours are available. 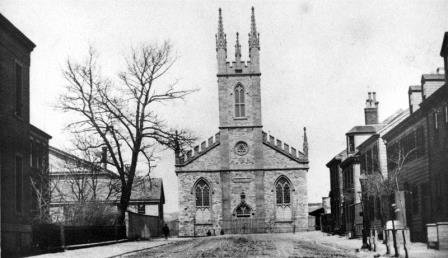 The building opened in 1904 as one of 2,509 public library buildings Andrew Carnegie gave to  communities of North America. It is an outstanding example of the period architecture with a stained glass ceiling in the almost 3-storey-high rotunda. The building was refurbished as part of the Saint John Bicentennial celebrations (1983-85) through the generosity of the Beaverbrook Canadian Foundation and the Royal Bank of Canada. The Saint John Arts Centre serves as a centre for the Arts & Sciences in Saint John.

These buildings were built between 1854 and 1857 by brothers-in- law Hastings and Armstrong. The plain, classical lines are typical of many fine homes of the period, when any extravagance was confined to the interiors. The entrance of Number 1 is still decorated with exquisite wall and ceiling paintings. The front door of Number 1 is believed to be carved by John Rogerson, Saint John’s best know wood craftsman of the period. 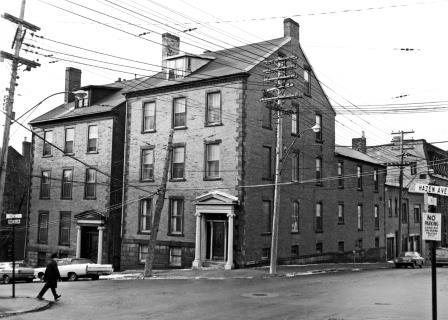 While in the lobby of City Hall, note the record of past Mayors and the City’s Corporate Seal carved by John Graham in 1830. At the second meeting of the newly incorporated City of Saint John on May 23, 1785, Mayor Gabriel Ludlow was directed to have an official seal designed. The design was presented to Council and approved at the May 26, 1785 meeting. This corporate seal is also used as the city’s crest.

This corner was originally granted to James Putnam, who studied law with John Adams in Boston and was appointed Assistant Supreme Court Judge in 1784. Putnam erected a splendid three-storey building with a store on the lower floor. Putnam died and the lot was sold to Ezekiel Barlow, who had to comply with some unusual terms of sale. The price was $2,000 in Mexican silver dollars, to be counted in coin before lawyer Ward Chipman. To the great merriment of the public, Barlow procured a  wheelbarrow and pushed his considerable load up Chipman Hill to the lawyer’s office.

The area derived its name from its early function as a market place for the City. By the 1860s, Market Square, along with King and Prince William Streets, was the centre of the City’s dry goods trade. From their construction immediately following the Great Fire of 1877, to well into this century, the numerous warehouses, which lined both sides of Market Slip, held cargo from around the world. Today seven of these warehouse facades have survived and are incorporated into the Market Square Complex. In 1996, the New Brunswick Museum opened its 3-storey exhibition space.

Adjacent to Market Square is Market Slip, celebrated as the site of the first Loyalist landing on May 18, 1783. At one time there was a slip of water that extended approximately to the bronze moose located on the Market Square Boardwalk. Along each side were several warehouses. Ships arrived at the Slip and were able to unload their goods on either side. 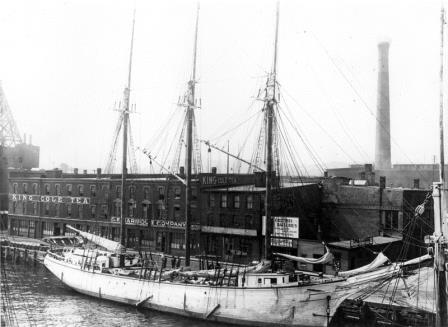 Once located at a rural crossroads 80 miles north of the city, the store was restored in 1967 by the G.E. Barbour Company Limited to commemorate the Centennial of Canadian Confederation and the company’s 100th anniversary in business. It now stands near the site where the company first went into business. The store opens annually between June and October and visitors can see a number of 19th and 20th century artefacts and goods.

In 1787, Benedict Arnold took up residence in a large frame house on this corner. His arrogant manner and sharp business dealings made him heartily disliked by his fellow citizens, who at one point burned him in effigy. The present structure was constructed in 1878 for James Vassie and Co., wholesale dry goods and woolen merchants. Note the painted crosses on and below windows on the upper floors of the building and its neighbour. City building codes of the past required this as an indication of where occupants would gather to be evacuated in case of fire.

On this block, there were four similar structures, four storeys high, built in 1878 and known collectively as the “Commercial Block.” The building at the western end of the block was destroyed by fire in 1906. Shortly thereafter additional storeys were added to the remaining three buildings.

Built in 1880 to plans by architect W.T. Thomas of Montreal, the present Trinity Church replaced Old Trinity, a wooden structure, which was built in 1791 and destroyed in the Great Fire of 1877. On prominent display inside the church is the Royal Coat of Arms of the House of Hanover (constructed in 1744), dating to the reign of George I, who became King of England in 1714. The Coat of Arms arrived in Saint John after being rescued from the old Boston Council Chamber by Colonel Edward Winslow after the American Revolution. It was once again rescued from old Trinity Church during the Great Fire of 1877. Trinity Church welcomes visitors during the week. 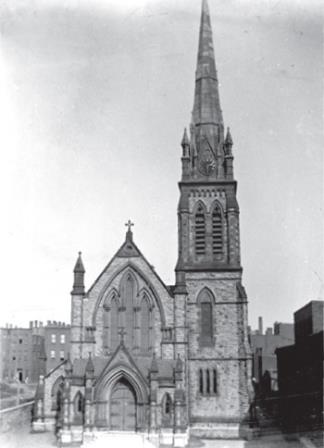 In 1911, Albert E. Westover, a leading architect from Philadelphia was retained to design a performing centre for Saint John. It opened in 1913 as the Imperial Theatre, a 1500-seat structure. Over the years, it has featured such greats as John Philip Sousa, Ethel Barrymore and Gracie Fields. The theatre was renamed the Capitol in 1929 and began showing movies in addition to the live performances it already offered. In 1957, it was sold to the Full Gospel Assembly. A public campaign in 1982 raised $1 million to purchase the building. The renovated theatre opened May 1994. Tours are available for a fee; between September and April please call ahead.

Engine House 2, built in 1840 - 1841 in the Georgian style, served for many years as a fire station and later as a tourist bureau. Open July and August.

Hotel Room Sales on the Rise in Saint John