On June 24, 1604 – St. John the Baptist Day – French Explorer Samuel de Champlain landed at the mouth of a mighty river. In honour of the day, he named the river “St. John.”

Almost thirty years later, in 1631, Charles de La Tour, the newly commissioned Governor of Acadia, built a fortified trading post as his headquarters at the mouth of the river. In 1645, the fort was captured by La Tour’s rival for Governor, Charles d’Aulnay, after a valiant defence led by La Tour’s wife – Françoise Marie Jacquelin – while her husband was in Boston seeking aid from the English. In the years that followed several other French forts were built in the area, among them one on the west side which, under British rule, was to become Fort Frederick. A new tourism development interpreting the heritage of the Fort La Tour site is being developed at this site.

In 1713, the Treaty of Utrecht ceded French Acadia, including the Saint John River Valley, to England. The French settlers were gradually displaced by colonists and traders from New England. The Massachusetts firm of Simonds, Hazen and White established a trading post at the river mouth in 1762, and the first permanent settlement in the area was born.

In 1774 the American Revolution broke out and bands of American rebels and privateers raided the eastern seacoast, destroying Fort Frederick and threatening to topple the Simonds, Hazen and White enterprise.

Fort Howe was established in 1777, safeguarding the mouth of the river from further attacks, and the struggling settlement resumed its growth.

At the end of the Revolution, in 1783, 14,000 American supporters of the British arrived in Saint John en route to settle along the Saint John River using land grants allotted to them by the crown. Some of these “Loyalists” – as they were called – established two settlements, one on either side of the river mouth, “Parrtown” on the east and “Carleton” on the west. In 1785, the two settlements were incorporated by Charter into the City of Saint John – Canada’s first city.

The years that followed brought economic growth and social development. Saint John developed a prosperous timber trade and a wood shipbuilding industry, which by the mid-1800s was the third largest in the world.

Saint John also attracted an influx of immigrants. In the 1840s, more than 30,000 Irish – fleeing the potato famine in their own country – arrived in Saint John. Many suffered from smallpox, typhoid fever and cholera and were quarantined on Partridge Island. More than 600 are buried there.

Canada’s Confederation in 1867 dealt another blow to Saint John and to the Maritimes. In order to encourage Maritime trade with central Canada, the government of the new dominion imposed high tariffs on foreign goods forcing Maritime businessmen to import costly materials from Ontario and Quebec.

Then, in 1877, a disastrous fire destroyed the city’s central business district and much of the residential South End. The task of rebuilding the city was an enormous one for Saint John’s citizens – but rebuild it they did, this time out of brick and stone in the commercial district, in an even grander fashion than before!

Better times were underway. Beginning in 1880 the railway expansion provided direct links with the rest of Canada, stimulating the flow of goods and commerce. Consequently, the port began to flourish and manufacturing boomed. Even the shipbuilding industry was revived with the establishment of the Saint John Dry Dock in 1923. Gradually, Saint John regained its prominence as an important manufacturing and shipbuilding centre.

But the story does not stop here. Today our city – the only city on the Bay of Fundy – mixes our centuries-old charm with a vibrant waterfront, a flourishing arts and culture scene and a host of friendly people, ready to share their own Saint John stories.

Take in our historic architecture, step back to the time of our earliest settlers and immerse yourself in our tree-lined neighbourhoods. Packed with interesting facts and charming stories, the Three Historic Walking Tours brochure will be your valued companion along the way. 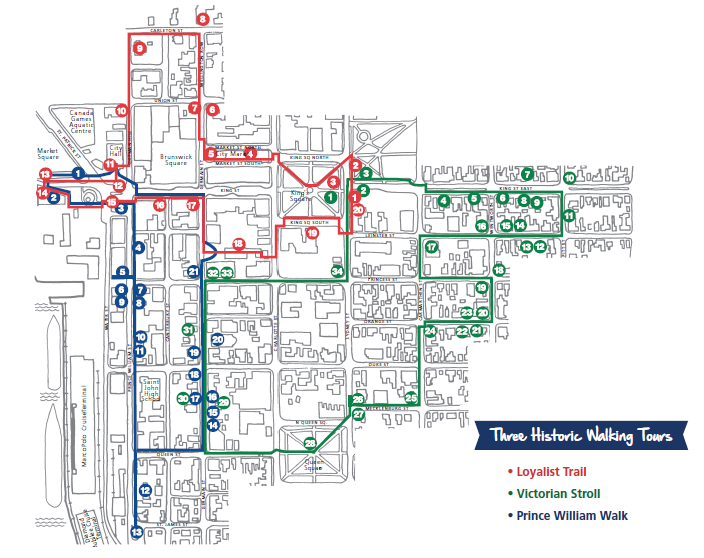 The assistance of Harold E. Wright and the New Brunswick Museum in preparing these tours is appreciated.
Photos courtesy: Heritage Resources, Saint John

The ABC’s to Valentine’s Day in Saint Awesome