There was a time not that long ago when the words “fine dining” and Saint John were never mentioned in the same breath. That time has passed. One could make a very strong argument that Saint John has the most vibrant dining scene in New Brunswick, and is the food and drink hub for the province.

This is in contrast to what many New Brunswickers think, largely because Moncton hosts an excellent annual World Wine and Food Expo (coming up the first week in November) and Fredericton has arguably the best spirits festival in Canada, Raise Your Spirits, taking place Nov. 22 to 26, and the highest per capita number of breweries in the province. That said, these cities have not experienced the new openings of quality restaurants and pubs that Saint John has enjoyed over the past five years, joining the others that have been in operation for a decade or more.

Saint John is a fine destination for a food and drink “staycation” for New Brunswickers, as well as an attractive foodie tourism destination for visitors from other provinces and countries, including the tens of thousands of cruise  ship passengers that descend upon the city each summer and fall, making it feel like a large metropolis, where live music blasts out of pubs on midweek afternoons and the patios are filled with beer drinkers.

Next week from Oct. 31 to Nov. 6, is Uptown Saint John Inc.’s annual Chop Chop restaurant week, so this is a good time to take a look at some of the best options for food and drink in the Port City (Uptown is what Saint Johners call their downtown. Don’t ask them to explain. Most don’t really know why it’s called that).

There are so many options now that it is difficult to choose where to go when faced with only one night on the town. Certainly two days is better, but here are some ideas for a night in the Port City.

First, make sure you are not driving afterwards. Leave the car at home and take a cab, or stay at a hotel. The Delta offers convenience, comfort, parking and some great views over the city, as well as Mix restaurant/bar. There is also the waterfront Hilton, with its York Bistro, and smaller hotels and B&Bs.

A good place to start is with a pre-dinner glass of wine at Happinez wine bar on Princess Street, directly underneath the very popular Britt’s Pub. Owned by Peter Smit, a former hotel hospitality professional and instructor originally from Holland, Happinez celebrated 10 years of happiness in 2016. The bar, modelled after Amsterdam’s famous “brown pubs,” is quaint and rustic, dark and moody, but very friendly. Equipped with a preservation system, Happinez has the best (if not the largest at 22) by-the-glass selection of wine in the province, largely anchored on good value European wines, as well as some special cellar wines available only by bottle. Smit chooses his own wines, not relying on arrangements with wine sales agents, and the by-the-glass selections change regularly, including a wine of the month and his special Zip wine, something more rare and special. Wine prices are lower than most restaurants, perhaps because Happinez is not a restaurant. He does offer some New Brunswick cheese and charcuterie, but there’s no kitchen and thus no accompanying overhead.

If you are interested in fresh seafood, there are several good choices in the uptown, including the Saint John Ale House down on the boardwalk. They have their own celebrity chef, Jesse Vergen, who many know from Top Chef Canada and festival     appearances. They specialize in upscale pub food, including lots of seafood. In addition to the usual lobster and haddock dishes found in most Maritime restaurants, they might be the only New Brunswick place with periwinkles as a staple, as well as smelt, smoked mackerel and, as of last week, capelin. The capelin and chips is a good value dish that can either be a main or shared as an appetizer. They also have a large selection of draft beer, including New Brunswick microbreweries Flying Boats, Hammond River and Petit Sault, as well as the only hand-pumped cask beer available anywhere from Moosehead, and a good bottle lineup. They feature a Canada-heavy wine list, with some notable choices from some of Canada’s best wineries (Norm Hardie, Osoyoos Larose) as well as local New Brunswick and Nova Scotian wines.

Port City Royal on Grannan Street arrived with a bang two years ago, making it to No. 2 on Enroute Magazine’s top new restaurants in Canada for 2015. Chef Jakob Lutes moved from Ontario with the intent to open a place that featured local food, extensively, not just talking the talk but actually doing it. Their menu is simple in some ways but original, with such quirky items as a donair using ploye (buckwheat pancakes traditional to the Brayonne in northwestern New Brunswick) instead of pita, house charcuterie and extensive use of seasonal vegetables, such as the smoked turnip, sweetened kale and roasted fennel that accompanied their pork feature last week. They also use foraged greens and other New Brunswick fruits and veggies, some of which they pickle for future use. With its unique, gorgeous design that reveals the history of the space, Port City Royal has become an attractive spot for folks to meet for a drink. They are famous for their extensive cocktail menu designed by bartender Eric Scouten, which includes such features as a “White Negroni,” made without the bright red Campari, but is refreshingly, lemony delicious. Scouten makes some of his own ingredients and also sells bitters used for custom cocktails.

No special meal is complete without dessert and there is no better purveyor in New Brunswick than East Coast Bistro. Married chefs Kim Steele and Tim Muehlbauer moved to Saint John from Vancouver four years ago, taking over the Opera Bistro space on Prince William Street. Both had extensive experience in Vancouver, including Steele, originally from the Saint John area, having previously worked as a pastry chef at Fraiche and Crave.

East Coast Bistro is an excellent restaurant from start to finish, with everything from vegetarian to burgers, salads, seafood and pasta prepared with consistency and confident flavours, properly seasoned. They really do shine at dessert, though, as is evidenced by their sticky toffee pudding with house-made vanilla ice cream. Besides a small, but thoughtful wine list, they also offer bottled local beers and specialty coffees, including the delicious Darren’s Moustache, with cinnamon, chocolate and whiskey components (Darren is one of the sous chefs – you’ll have to ask him why it’s called that). 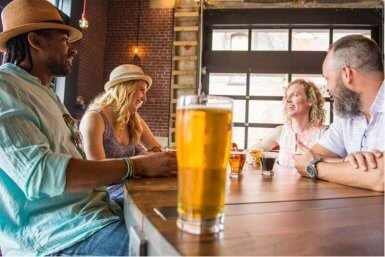 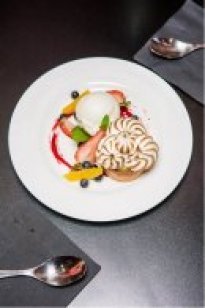 There are lots of other good choices for dining in the uptown area, including   pubs with good food and beer (Britt’s, Churchill’s and the new Cask & Kettle), Thandi for Indian,Italian by Night,Lemongrass/Pepper’s for Thai and great beer, EN Sushi,Taco Pica,Taste of Egypt,Decimal 81 for classic fine dining, and Gran-nan’s and Billy’s for seafood.

If it’s a tasty beer or other drink that you are looking for, there are some very cool establishments uptown. Picaroons General Store on Canterbury is a brewery, beer store and taproom combined. With its garage-style doors that stay open in warm weather, and stylish interior including a large circular wooden table, it’s a great place to grab a quick pint and chat with friends, then take a growler for home. The same goes for Big Tide, the town’s only brewpub, on Princess, which has a variety of pub food, active trivia nights and good local beer on tap or to go.

The most recent additions to uptown Saint John’s food and drink scene are Eighty Three Bar Arcade on Princess, where you can play vintage video games while drinking Picaroons Logger and Hopscotch, a new whisky bar on Canterbury that features a wide selection of spirits and cocktails,an intimate atmosphere,   and … yep, a large jackalope hanging from the ceiling.Saint John may be foggy, but it’s far from boring.

The days of Saint John being left behind in the New Brunswick dining and nightlife scene are behind us, and with several more new places opening soon, including Loyalist City, another brewery with a taproom; a beer and music bar called The Five and Dime; and a newly-expanded Italian by Night, eating and drinking uptown is about to get even better. Join us for a night. In fact, you should probably stay over. Most of these places do brunch.

Craig Pinhey is a writer and sommelier based in Rothesay.

The places mentioned in this article are just some of the dining locations to visit for your Saint John food and drink staycation. you can find many more on the list of restaurants participating in next week’s chop chop event at  chopchopsj.com.