Salmon Run explores society and nature as the city streams by

My Salmon Run tour starts, as so many good things do, with coffee from Rogue. Americano in hand, I set out on foot, guided by the walking tour app from Discover Saint John, which led the project, which saw a trail of 10 fish sculptures wending its way through the uptown.

It’s not just the physical city but also currents of meaning I navigate as I seek out the striking six-foot fiberglass forms. Identical in shape, they became the canvases for diverse treatments by seven New Brunswick artists who embraced the challenge of transforming the curving, three-dimensional form in a variety of ways.

In the alley in front of the cafe, I check out Geordan Moore’s ‘Sunset on the Kennebecasis,’ in which the salmon has become a container for the printmaker’s lush seascape. Knowing Moore’s work, which is often humorous and playful, I assume there’s a joke at play. A visual pun, perhaps, about fish out of water?

Of course, that’s what the sculptures are, and they accomplish what art should: jar us out of our reveries, make us rethink the familiar.

I like how the American writer Alison Hawthorne Deming, who summers on Grand Manan, talks about art in ‘Zoologies,’ her lyrical collection of essays on animals and the human spirit.

“Art provides a ritualized way to choose beauty over use, to use dissonance as a way to find harmony, to express something in a way that will draw a community together,” she writes.

What’s more dissonant than a fish out of water?

Art “weaves connective tissue between fact and feeling, self and world, individual and collective good,” Deming writes. These intersections are manifest in Salmon Run, which present a diversity of themes, ideas and aesthetic experiences.

In a sense, perhaps more than any other creature, salmon are New Brunswick.

At the top of the symbolist food chain on the province’s coat of arms, a crowned salmon lords over it in fishy glory. On the City of Saint John’s coat of arms, salmon occupy a full quadrant of the shield.

These official depictions reflect the fish’s primacy in our history and conception of self, particularly in relation to nature.

Down the alley, I take a left onto Grannan Lane, to the courtyard at Centerbeam Place, where Jack Hudson’s ‘Ringy Dingy Salmon’ is papered with pages from the phone book, decorated with colourful spirals of old telephone wire. Hudson’s interest in obsolescence continues in ‘Maple Glazed Salmon,’ on Prince William Street, his second piece, in which pennies are repurposed as coppery scales. Referencing industry and the economy, these works strike a nostalgic note, too, about change and decline, influences to which salmon are susceptible.

Salmon are beautiful, powerful, delicious, tenacious, precious. They are particularly apt symbols of Saint John, a city situated at the dramatic convergence of fresh and salt water, both of which salmon makes a home.

In Salmon Run, Saint John joins a host of cities around the world that have hosted animal-based public art projects, perhaps none more famously than CowParade, which bills itself as the largest and most successful public art event in the world. Its trademark bovine sculptures have been created and installed in 79 cities since 1999. Of course, there are many non-sculptural examples, as well, including a series of vibrant giant-scale murals of endangered birds that have been painted on buildings across uptown Manhattan in honour of John James Audubon, the celebrated 19th-century painter of bird life.

The conservation concerns of that project, recently featured in the New York Times, resonate in Salmon Run. With catch-and-release restrictions on anglers in recent years, and debates around aquaculture ongoing, salmon’s environmental implications are clear, as Lisa Ann Scichilone makes clear in ‘River to the Sea,’ her colourful painting charting the environmental challenges salmon face on their journey. Down at the port, and in front of Market Square, form and technique unite in Deanna Musgrave’s two contributions, ‘Rose’ and ‘Gold Fish,’ whose lush, cosmic painting designs are achieved by a unique watermarking process, one of many connections to water and salmon embedded in her work.

Salmon Run is about the fish, and much more.

In the lobby of Imperial Theatre, Jean Hudson’s ‘The Mermon,’ of one two pieces she contributed, (the other, ‘Wild Salmon Waterways,’ is installed at the visitor information centre) is an extravagant character whose playful exterior speaks to a deeper wish that people are free to be themselves.

Out front of the city market, a gathering place and point of pride, Holly McKay’s bold, graphic ‘Flags Together’ makes manifest the city’s colorful history, using elements of Acadian, Irish, Loyalist and Syrian flags to speak to Saint John’s history of immigration and welcome.

Following Salmon Run through the city, a host of watery metaphors come to mind. Art is a way to chart currents of change, streams of thought and wellsprings of inspiration. Like the salmon, we inhabit a complex, shifting ecosystem, a city that is always flowing out of the past, into our imagined future. 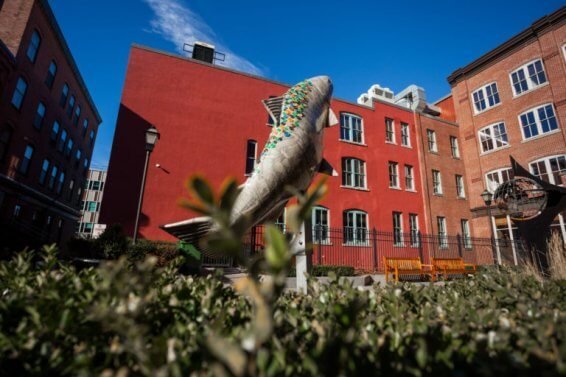 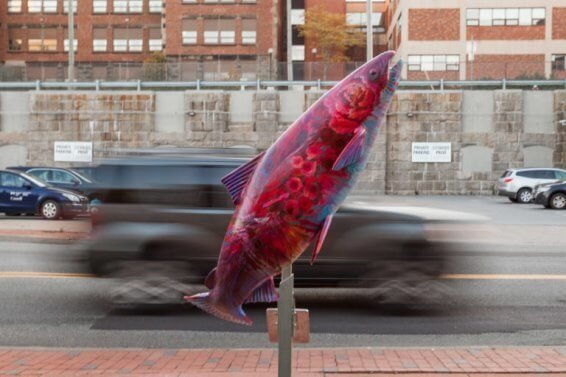 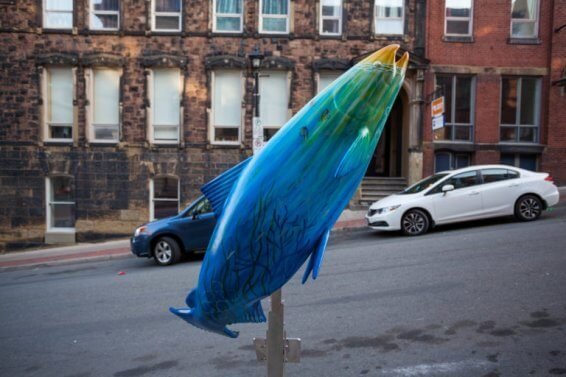 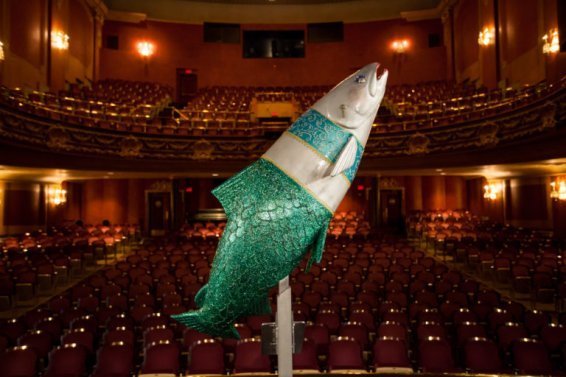 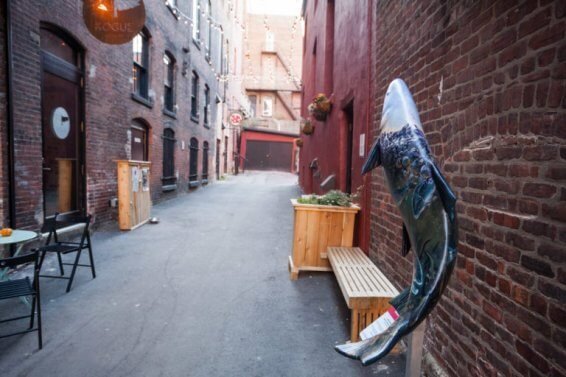 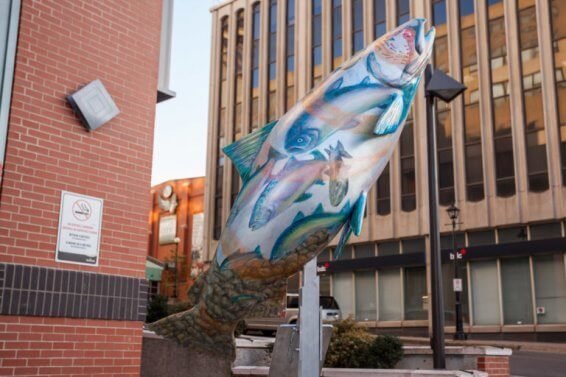 The ABC’s to Valentine’s Day in Saint Awesome

Another Big Year For Tourism In Saint John

A Rising Tide Lifts All Boats in Saint John